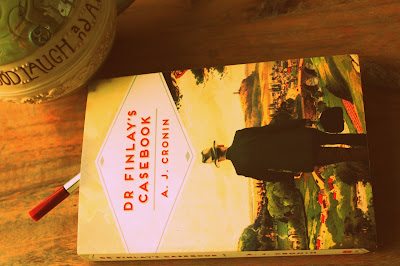 A couple of months ago, standing at the bookshop counter waiting to pay for my armloads of books, the owner saw me looking in the general direction of this book placed several rows away, and gently but firmly, pushed it within my direct gaze. My, "How are these books? Haven't heard of them..", was answered with an instant pair of raised eyebrows and the name - "A.J.Cronin" said in such a defiant and incredulous tone, that I sheepishly pushed the book towards the burgeoning pile already next to the cash register. And it was with that unsaid recrimination of "How can you not have heard of A.J.Cronin" that I was tentatively and sheepishly introduced to Dr Finlay.

The volume itself consisted of two two series, Adventures of a Black Bag, and Dr. Finlay of Tannochbrae, with stories divided into short chapters. As expected, each story deals with a medical issue and circumstances around it, most often lighthearted and mirthful but a few also showing surprising depth of understanding of the malice in human nature. At no instance though was the medical detail the fulcrum of the case, rather it was the social circumstances around the secondary character (Dr Finlay being the primary, the patient was always relegated to peripheral secondary reference within the story) that the short story revolved. Having plodded through a couple of the stories randomly selected, it was 'Pantomime' and the story of Letty le Brun, sarcastically needled and subtly bullied to a fateful and fatal climax, that I started paying attention to the writing. The stories were slightly reminiscent of that other famous doctor, James Herriot, but the writing was less enticing. I understand these stories were set during the inter-war years, and perhaps I would have enjoyed them more a few decades ago as I went through a phase of reading anything and everything set in Britain of the inter-war era. At this point, these stories were just a tad simple for my liking. In addition, the two series were confusing in terms of Dr Finlay's personal life, with a number of love interests flitting in and out as tangential characters. The Tannochbrae chronicles were rampant with Scottish slangs and sentences, and I have to admit I amused myself by reading them aloud and thinking whether reading the words written as such made me sound Scottish -

A.J.Cronin isn't particularly kind to the female characters in the stories, making them out to be silly, simple and often stupid and spiteful. All in all, I think I will read-up a bit more on A. J. Cronin himself, and at some point will check out the BBC series on these stories, being a glutton for old Brit series as a sort of remembrance of the half a decade spent there a lifetime ago. As for picking-up further chronicles of Dr Finlay, I think I shall desist.

A Life Apart....if only. Autobiography of Dr Prabha Khaitan. 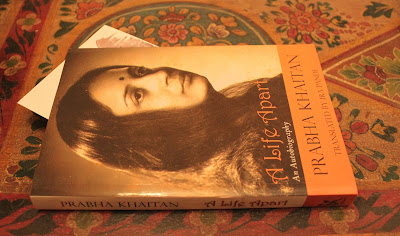 
I have to admit I hadn't heard of Prabha Khaitan before I picked-up her autobiography. "Why did I then? - pick it up that is.." you might ask. Well it was one of those days when you head to a bookshop and cannot tear yourself away from the host of treasures all around. Something on a page catches your eye and a voice says, "C'mon then, get out of that comfort zone" and lo and voila, a new author is discovered.

What caught my eye was also that it was  published by Zubaan Publishing House, one can rarely go wrong with Zubaan's books, and the cover indicated that here was a woman who, despite being from a conservative family, lived life on her own terms, set-up a successful business house and defied society by being the "other" woman. Sounded interesting, so why not.

The original autobiography was in Hindi, and this was a translated version. Perhaps nuances of the original got lost in the translation, I am not sure. In any case the autobiography left me feeling disappointed on many levels, and sad for the life that dealt with so much unhappiness. The writing at a multitude of junctures was so simple as to be a schoolgirl's diary, especially the chapters describing Khaitan's trip to America and her fears and foibles during this maiden journey abroad. The day to day adjustments of eating, living, working in a land away from home where everything seemed at-odds with what she knew, seemed to have consumed Khaitan. Not for her the intellectual musings but the day to day, hour to hour, worries of the type of food, mannerisms, clothes, etc. I found this rather hard to digest especially keeping in mind that she had already broken several molds in India by venturing out during her student and work days.

But, the overwhelming disappointment was the all-consuming relationship that Khaitan had throughout her life, with a Dr Saraf of Calcutta, a married man, who at no juncture of the autobiography could be described as worthy of her, showing neither love, care or compassion towards her. Yet, she ended-up being completely submissive to his whims and desires and led an utterly unhappy life within the constrains of this unequal relationship. To have to go through so much sadness, especially for someone who was a trailblazer in other respects, was disheartening and disappointing to read, and I almost wanted to shake her by the shoulders to get some sense into her head. Perhaps some parts of the story cut a bit close to an own past experience, leading me to have even less patience than I usually do with the writing. Oh how I wish she had shaken herself out of the stupor and moved on with her life much earlier than spending it on a one-way street. For her, the realization of the true nature of the partnership only came towards the end of her life. As always the social judgement on the woman while the man goes about his life in a jolly manner, was hard to read and frustrating. Things unfortunately have not changed much in the decade since Prabha Khaitan's death.

I also wish her own writing had been described in the autobiography, as there was barely any mention of the books she had written.

For me, of more interest was also the parallel narrative of the political and social upheaval of the Naxalbari movement in West Bengal and the impact on the education and industrial set-up of Calcutta during that time. This forms the backdrop of the time when Prabha Khaitan was a university student in Calcutta and the increasing political chasms and Naxal armed struggles and unionism, and their impact on the day to day life of people in the city, were well described. 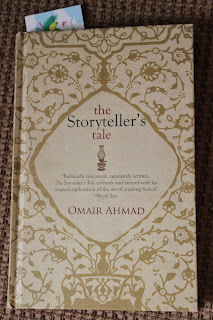 "..the road is still open and there is much to see, but only if you have the courage to see that the first step is always a departure."


An enjoyable novella on conversing through stories, and what stories these are, stirring memories of old fables of loyalty, bravery and love. Very nicely gathered and strung together. An easy read interspersed with several beautiful sentences.
Posted by D Naruka at 10:39 PM No comments:

This work is licensed under a Creative Commons Attribution-NonCommercial-NoDerivatives 4.0 International License.

From here, there and everywhere